Posted by David Nelson, CFA on April 25, 2016 in Investment Management | Leave a comment 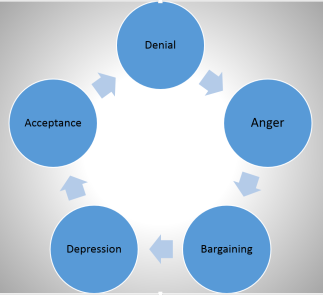 Denial, Anger, Bargaining, Depression & Acceptance – The 5 stages of grief first introduced by Swiss psychiatrist Elisabeth Kugler-Ross in her 1969 book, On Death and Dying are normally associated with a terminal disease. But in the context of finance they are often used to describe investor emotions in the throes of a bear market. Well known author and market strategist Barry Ritholz used it in his January, 2008 article for Seeking Alpha. His timing was perfect as we were still in the early stages of what would soon be called the Financial Crisis of 2008.

This week Barron’s cover story highlights their Big Money Poll pointing out only 38% of money managers are bullish on the outlook for stocks. While only 16% said they were bearish, nearly half the respondents said they were neutral on equities. (IMHO neutral is a term often associated with “I have no idea”)

With the market just a stone’s throw from all-time highs, I’m sure many would agree bulls are living in denial and the market is just one headline away from a crash. Let me turn the 5 stages of grief concept on its head and suggest it isn’t always associated with a coming bear market.

The rally off the February lows has been described by the media as one of the most hated in recent memory. Usually, that means investors are leaning in the wrong direction or de-risked their portfolios at or near the bottom. For the last several weeks, the pain trade has clearly been up. When one sector or style loses steam another is close behind ready to take the lead.

At the start of the year Utilities (XLU)*, the ultimate defensive sector was trouncing the rest of the field. In recent days it has slipped to #2 as last year’s loser, Energy (XLE) pushes into 1st place.

2016 has been all about value with growth and momentum taking a back seat. The ultimate momentum trade, FANG stocks – Facebook (FB), Amazon (AMZN), Netflix (NFLX) & Google (GOOGL) have given way to long-time laggards like Freeport (FCX), Hess (HES). 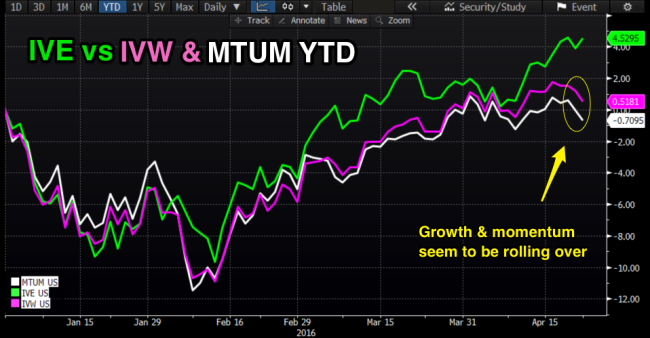 Let’s apply the 5 stages of investor grief to the recent rally:

Denial – The rally is a dead cat bounce. New lows are just around the corner

Anger – It must be the Fed. Conspiracy theories run rampant

Depression – You didn’t get the pullback you hoped for or failed to pull the trigger when it did.

Acceptance – Somewhere well north of all-time highs investors capitulate and finally jump on board. Of course this usually marks the beginning of investor complacency. Nothing scientific about the number and not a prediction but 2250 in the (SPX) S&P 500 is just about the point where bears would throw in the towel, Barron’s Big Money Poll turns from bear to bull and of course that’s just when the market will be most at risk.

As for today, I suspect we are in the Bargaining stage. There are a lot of investors praying for a market pullback hoping to get back in. The question is; will they pull the trigger?

*At the time of this article funds managed by David Nelson were long these stocks or etf’s.