Wall of Worry is 21 Miles Wide 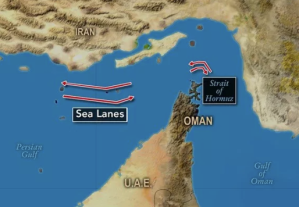 With tensions rising in the Middle East investors are increasingly focused on a waterway only 21 nautical miles wide halfway around the world. The Strait of Hormuz sits strategically between the Gulf of Oman and the Persian Gulf where most estimates point to 1/3 of the world’s sea-borne oil passing through the strait every day. With Iran to the North damaged economically by a stranglehold of U.S. economic sanctions, tensions have been rising for most of the year.

There have been several incidents including last month’s downing of an unmanned U.S. drone. Just last week, the U.S.S. Boxer leader of an amphibious assault group took defensive action electronically disabling an Iranian drone that had been deemed a threat, encroaching to close to the American ship and the 4500 crew members across the entire group.

Escalating tensions further, Iran seized another British-flagged tanker in the Persian Gulf with a combination of boats, helicopters and commandos propelling onto the ship possibly in response to a July 4th incident when British troops seized an Iranian tanker off the coast of Gibraltar. The tanker was in violation of sanctions carrying oil to Syria

The situation is at best chaotic which always pushes some investors to abandon ship. Of course, market timing is a two-step process. You may get the exit right but what will be the trigger to get back in.

While the Strait of Hormuz is 21 nautical miles at its narrowest point, the shipping lanes are just 2 miles in either direction increasing the odds of escalation and a potential mistake.

The Barometer of Conflict is the Price of Oil

The barometer of conflict is of course the price of oil. The importance of energy can’t be overstated as it touches everything from the cost of manufacture to the cost of transportation. Every dollar oil rises cuts into the bottom line.

Trying to predict what oil prices will do when military conflict breaks out is no easy task. At the start of the Iraq War in August,1990 Brent Crude soared close to 93% before giving up those gains at the end of the war in February 1991.

12 years later the response was quite the opposite as oil fell $8 in the days leading up to the war. Brent continued to fall at the start of the invasion before it stabilized in April moving higher that summer.

Even the attacks on ISIS back in September 2014 saw oil prices sliding more affected by the apparent unwinding of OPEC power than the geo-political events unfolding in the Middle East.

Look, no one’s questioning the potential of a knee jerk reaction to escalating conflicts in the Middle East, but today’s landscape is significantly different from where we were at the start of the century. OPEC saw its start in Baghdad following a conference from September 10-14 in 1960. The five founding members Iran, Iraq, Kuwait, Saudi Arabia and Venezuela were later joined by five others and today stands with a membership of 13 nations.

Today, OPEC as a cartel like structure able to dictate prices is effectively dead. Yes, OPEC is still with us and can influence prices at the margin but the onset of revolutionary technology like fracking has turned the United States into one of the top producers in the world, a dynamic that hasn’t existed for the last half century. OPEC leaders like Saudi Arabia need every oil dollar they can pump to help fund their social programs and military expenditures. Some members like Venezuela are close to economic collapse forced to sell whatever they can to stay afloat.

Today, economic demand for crude products is a bigger influence on the long-range price of oil. I’m not going to speculate on how much of a short-term spike will take place on the heels of rising tensions even war in the Middle East, but the smart money will sell into that rally. I doubt anything short of a nuclear event would change my call.

← Facebook’s Libra faces uphill battle on the hill Fed & Iran – Which is the market worried about more? →