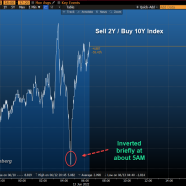 Posted by David Nelson, CFA on June 13, 2022 in Investment Management | Leave a comment

The two-year treasury yield briefly pushed above the 10 year early this morning. On a sustained basis it’s often thought of as a leading indicator of a coming recession. Some parts of the curve are already inverted and of course all this comes on the heels of a very disappointing inflation report Friday.

The CPI (Consumer Price Index) came in well above expectations at +1% month over month and +8.58% year on year. Any talk that we are at peak inflation has to be tabled at least until prices stop rising.

On its own Friday’s CPI would have been enough to push stocks lower, but the one two punch of a hot inflation report and Consumer Sentiment now at the worst levels in close to 50 years forced a lot of money to the sidelines.

The bigger issue: even if this were the top for inflation, what is it going down to? The idea that we could return to the Fed’s target of 2% inflation anytime soon seems a low probability. As I pointed out on Fox Business just last week 5% is the new 2%.

Fed and administration officials continue to step up to the microphone to lay out projections and a game plan. A promise to use every tool in your arsenal to arrest runaway inflation is fine. We expect that. Unfortunately, we need a little more than rhetoric to move the needle.

Talk the Talk. Do You Walk the Walk!

It’s been more than a year since the CPI broke meaningfully above 3% which on its own was well above the Fed’s own target. As of this writing the Fed is still accommodative with a Fed Funds rate of just 0.75% and a massive balance sheet that is only just starting to unwind. The Federal Open Market Committee is expected to hike the Fed Funds rate Wednesday by 50 basis points followed by another 50 at the next meeting.

Hello!! Inflation is at 8%. We may not have the luxury of following the current plan. Stop with the dot plots and the idea that the market needs to know you’re every thought.

The administration doesn’t get a pass on this either. Don’t worry if you think this post is partisan, I’ve saved the best for last. Both sides of the Congressional aisle get an F for their efforts.

First of all, there is nothing in the President’s Wall Street Journal Op-Ed that lays out a plan much less a vision on how to address inflation. Hiring more IRS workers to collect taxes from Billionaires or eliminating the incentive for companies to shift profits overseas is fine, but what does that do for inflation. Save it for the political agenda.

The war in Ukraine has certainly added to inflation expectations, however prices were rising across the board before the invasion was launched.

I do think Medicare should be able to negotiate with drug companies on pricing. I concede to the President on this point. However, an even better approach would be to support legislation making it illegal for drug companies to charge more in America than they get from developed countries offshore.

Some Americans believe that healthcare is more affordable overseas. Of course it is! We help pay for it.

Drug companies charge a price in the United States that insures they cover the cost of discovery and a profit. Overseas they know they can’t get that, so they sell it at a reduced price for the incremental revenue. As long as what they pay is above the cost to manufacture and shipping, it adds to the bottom line. End that and drug prices will come down here and go up in other parts of the world. Pharma companies will make the same revenue and drug discovery will continue.

The President’s desire to put America on a path toward alternative energy is supported by many including yours truly. However, you don’t bury the American Economy on the way to achieving you goal. Shifting to a greener society isn’t a 5 or even 10-year process. Attacking the U.S. Energy Complex to score political points doesn’t play well when you go back to those same companies begging them to put dollars into the ground. Even worse pivoting to OPEC rather than Texas as a solution seems counter intuitive.

I Win You Lose

Unfortunately, congressional debate in this country has come down to I Win You Lose Politics. Helping the American people comes well behind the goal of hurting your opponent and here no political party is innocent.

Republicans and Democrats pounce on every opportunity they get. 2022 is an election year so God forbid if someone on the other side of the aisle has an idea that shows promise.

The President in his role has many tools not the least of which is an Executive Order. All President’s use them to move quickly or when they feel they won’t get the desired outcome in Congress.

While the use of executive orders has been rising in the last 25 years no modern President even comes close to Franklin D. Roosevelt who holds the record at 3,721. It’s early in President Biden’s term who currently stands at just 90.

Executive orders can be fleeting and can have a lifespan of just of the administration’s term. President Trump learned that lesson the hard way as many of his were overturned in the early days of Biden’s presidency.

Excuse me for repeating myself but this next point is important. Energy and infrastructure projects have long time horizons and require $Billions in investment. No CEO is going to commit the capital needed to solve these problems without a firm grasp of what the regulatory enviornment is going to look like 4 years from now.

Any real effort to attack these problems including energy, infrastructure, climate change etc. needs to come from Congress. Senators and Representatives need to take just a fraction of their time and commit to working together on these critical issues. An executive order can be cancelled with the stroke of a pen. Legislation has a lot more staying power and would give U.S. corporations the needed confidence to to commit capital.

The truth rarely lives on the extremes. Compromise is an imperative for any government that serves a free and open society.